A downloadable game for Windows, macOS, Linux, and Android

A Normal Lost Phone is a game about exploring the intimacy of an unknown person whose phone was found by the player.

OUT NOW on PC, MAC, LINUX, iOS and Android!

Through the interface of a mobile phone, the player must discover what happened to its owner, Sam. Digging through secrets scattered among apps, text messages and photo galleries, the player-voyeur starts witnessing the emotions of Sam, and behind the apparent light-heartedness of a teenage story, their questioning on coming of age, homophobia, depression or the search of oneself.

"It shares some of the feeling of Her Story, albeit featuring today's technology and with less of a focus on the crime angle. But it has the same small moments of revelation, all of which come together to form a story in its own neat yet meandering way."
Rock Paper Shotgun

"This new phone has a lot to explore, even if you may not see it on the first look. It's a clever way of delivering a narrative, with you discovering more about Sam, the more you investigate the phone. Will you find out what happened to Sam?"
Alpha Beta Gamer

In order to download this game you must purchase it at or above the minimum price of $2.99 USD. Your purchase comes with a Steam key. You will get access to the following files:

I saw that twist the moment I discovered Sam hasn't been replying to Mom and Dad's messages. I guess I have intuition haha.

I enjoyed the presentation of the story - the subject matter is pretty mundane to me since I've been around Reddit support groups and the like. It did feel dirty sending messages to Alice when I wasn't Sam.

I must say the password system bugged me because number only passwords are so insecure! Too many sites that demand one cap one lowercase one symbol and one number from passwords.

A great game, I got really invested in it!! Although the gameplay mostly consists of reading, it's really entertaining! Also yay, LGBT+ stuff! <3

really good game, would recommend. as someone like them i really resonated w it :)

This is such a great game, I really enjoyed it. :)

I wasn't expecting much of this game but it really sent me on a journey and I cried when I got to the end. I was really hoping that the ending wouldn't be the typical cult-type thing these types of games do, and I was honestly surprised that it wasn't. Very good game <3

This game was wonderful and playing it is an experience that has stuck with me. Lovely interface, fun puzzles, i thought i knew where it was going but the ending still surprised me. The soundtrack is nice, does a great justice to the narrative.

Loved this! So good! I think eventually I want to buy this on my phone so I can replay it on an actual phone (got this as part of a bundle so I didn't get to choose what platform it's on) because I think it would really add to the expierence. Still awesome on a computer, of course!!

it took me far too long to realise there was more than just reading text messages. also I think there is bug where I see dates like 31/12/2015 and it probably should see them as 12/31/2015 (very frustrating if you are used to dates like the first one)

nice game, had a good time !

I wanted to cry after playing throught this game. Its beautiful and refreashing and engaging and just amazing. Thank you so much for creating, what in my eyes is, an amazing work of art.

got this in a bundle, didn't expect the ending but it made it so much more beautiful. hope my baby girl is alright :)

absolutely loved this. didnt expect digging through a phone could be so much fun haha. really loved the story; the ending was not expected but really wonderful it made me tear up <3

Got this in the bundle for Racial Justice and Equality and found it to be a really clever way to tell a story. Especially glad an android apk was included here so I could experience it on my phone.

This game impressed me! I love "found phone" games. Most found phone games are horror games, but fear not because this is not one. It tells a great LGBTQ+ story with a great ending. Oh, and the art and music are awesome. Can we buy the soundtrack somewhere?

Hey! I just recently got the game, and I've heard great things about it, but it keeps freezing on me. Like, the music keeps playing, but I can't scroll and clicking doesn't do anything. Any idea what could be causing that? I'm on windows.

Would this be suitable to play with 13 age plus teenagers watching as a part of a n online youth club session? Or are the themes too old for that? As I can['t find an age rating. Thanks!

There is some foul language and discussion of sexual harassment. I'd reccomend playing through the game once yourself before making a decision about a youth club.

Like many others, I got this game as part of the Bundle for Racial Justice and wow, this alone could've made that huge bundle worth it for me. I played it a few days ago; I'm definitely still thinking about it now.  The story is immersive, the mechanics of digging deeper into the phone is fun, and the ending left me sitting in front of my computer for a few minutes to process. Thank you <3

I love the art style, the music, the satisfaction when you dig further - but most of all I love Sam. What a beautiful experience.

This is the second game I've found in the Bundle for Racial Justice and Equality that addresses trans experiences, and I loved every second of it. Happening upon games that talk about trans people openly and positively makes my heart burst with happiness. Thank you for making this game.

What an interesting little game. Some of the plot twists sure caught me by surprise. And some of the stuff you have to figure out to progress really gave me a run for my money, too. A solid puzzle element.

...I was so worried it was going to have a bad ending. Thankfully it didn't!

I really enjoyed playing through this! I love how it ended, and it has honestly made me think differently about how I view my past. Thank you so much <3

Really well made game! And I'm really happy for Sam aaaaa wish I can do the same and get away to star anew

I...wish I could go back. To the feeling that I was moving away from something, and towards something else. Like Sam.

A charming, heartfelt story, told in an enagaing, immersive way - just a great experience, all around.

If you can, play this on your phone instead of the computer. It definitely pulled me in with how real it felt - to the point that I freaked out when I accidentally clicked "call dad" when reading through messages, & felt relieved when I realized the phone had no more credits LOL. (phone anxiety anyone??)

A well-made game that has beautiful aesthetics, calming music, & a really good narrative. It's intriguing to uncover the story though piecing together messages/emails/reading through forums. Also the way that the game approaches heavy topics is very relatable & real.

A great little puzzle game, it took me a couple hours to complete it, but as with any puzzle game YMMV on the time. ;)

The interface of the phone you find is pretty immersive - it does not feel like the simulation of a phone in a videogame.

The pacing of the narrative is stellar - you are given just enough info to know something is 'off' but not enough to be able to guess what is off until you continue snooping through this stranger's phone. And when looking back, everything makes sense with no glaring plotholes.

The puzzles are not glaringly easy but also not so hard that you'll want to rip your hair out in frustration.

My biggest praise about this game is its ability to also double as an entry level educational tool for the subject it tackles. It does a tremendous job at explaining things in a decent amount of detail while also being simple enough for people who know nothing about the topic at hand to be educated without too much confusion.

At last, I also deeply appreciate the amount of languages this game is translated to - for one, because it is a fairly text heavy game and secondly, because as said above, this nifty little game who doubles as a 'let's learn about a fairly obscure topic today' will reach a lot more people thanks to being in so many languages. As someone in a non-english country who knows a lot of people that are held back from enjoying games because of the lack of translations to my native language, thank you. :)

This was really well put together, it has a very emotionally charged story. thank you for making this and putting all the effort that you did into it

This was a gorgeously put together game! It definitely tugged at my heartstrings and I actually had to stop playing it for about a half hour (I teared up a little at the very beginning too). Highly recommend to everyone, even if you get frustrated trying to unlock all the pass-codes.

I find the interface design in this game really satisfying, it's so aesthetically pleasing while still selling the illusion of realism!

gorgeous little game with an intriguing story, that ended up tugging my heartstrings pretty hard. I love this game & recommend it for a quick story that doesn't feel cheap or rushed.

Omg I've wanted this game for months and months and got lucky enough to get it in the bundle. I'm really happy that I caught on to what was happening early on, since I can relate a lot ;P What a great game-- but oh god it's 4am now because I played it in one shot lmao

Thank you for all the hard work you put into this. I read every single thing, so much of it was spot on, educational, or just... I dunno, real? (And omg fuckbois dating apps made me laugh and cry a little) Also I super appreciated being able to scroll up or down in the credits. A+ feature.

This game had every right to make me feel the feelings that I'm feeling. Amazing art, storytelling, and every other aspect. I'm gonna cry myself through the next three hours. 10000/10

I adored this game! I really lovely story line with a main character that is constantly unfolding. Some really great educational content in there as well which was lovely to read through! I also adored the art style and soundtrack :-)

The game lists iOS as a platform but I can't figure out where that installer is. Can someone point me in the right direction?

In the app store. Games bought in this bundle are exclusive to itch.io. You'll have to buy it seperately from other services if you want to play it outside this one. 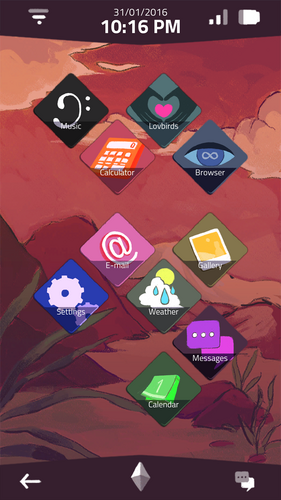 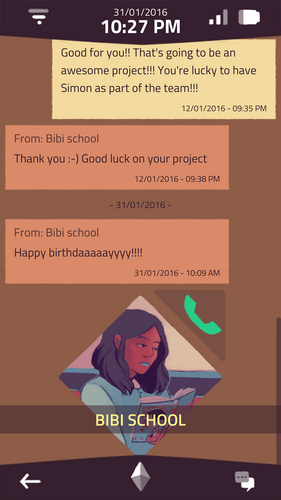 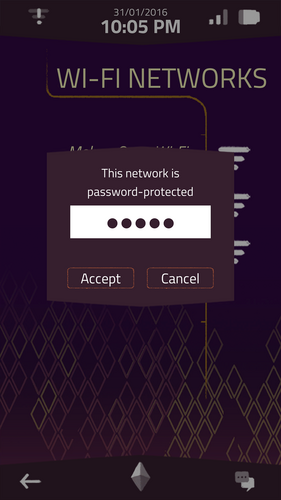 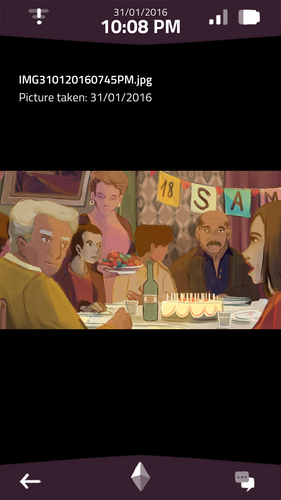 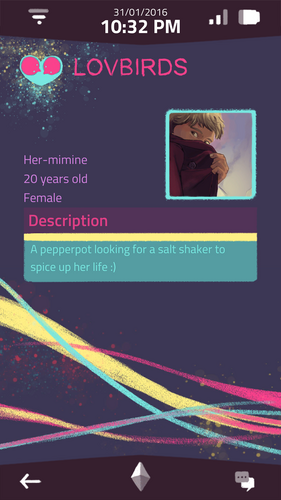